Skip to content
Brighten Your Day, with Sunshine, 3% is all you pay!

Over the past week, mortgage rates were negatively affected by comments from Fed Chair Yellen. In addition, investors shifted assets from bonds to stocks, as the Dow rose above the 20,000 level for the first time. Statements from the Trump administration about potential policy changes continued to cause volatility. The net effect of these influences was that mortgage rates ended the week a little higher.

Fed Chair Yellen gave two speeches late last week, which were viewed as more hawkish than expected, meaning more in favor of tighter monetary policy. Yellen said that a gradual tightening of monetary policy is appropriate and that it will take place through federal funds rate hikes and reductions in the Fed’s balance sheet. Her target level of 3.0% for the federal funds rate at the end of 2019 exceeded the outlook for most investors. This increased concerns that a reduction of the Fed’s holdings of mortgage-backed securities might begin sooner than expected, which would be bad for mortgage rates.

Recent housing data confirmed that 2016 was the best year for the housing market since before the recession. In December, housing starts rose 11% from November, well above the expected levels. For the year, housing starts were 5% higher than in 2015, making it the best year since 2007. Sales of previously owned homes in December remained near the best levels of the year, and 2016 as a whole had the highest level of sales since 2006. Recent data also revealed that inventories of homes for sale are at extremely low levels, so it is nice to see the strong data on housing starts.

Looking ahead, additional information about policy changes under the Trump administration could continue to influence mortgage rates. Also, the next Fed meeting will take place on February 1. No policy changes are expected. Before that, New Home Sales will be released on Thursday. The first reading for fourth quarter Gross Domestic Product (GDP), the broadest measure of economic activity, will come out on Friday. Pending Home Sales and the core Personal Consumption Expenditures (PCE) price index, the inflation indicator favored by the Fed, will be released on January 30. 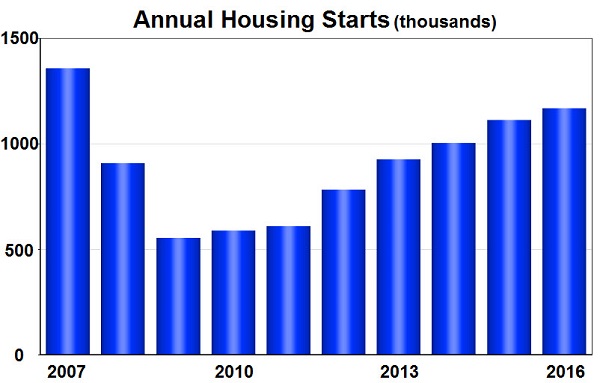 “We want to take this opportunity to thank you for all your assistance in getting our house sold in record time. We realize that it is not an easy job to price the home right and sell it, especially in the pandemic virus situation that the entire world is in and house sales not happening much across the country. As you are aware, we had our home in the market for quite some time with another agent but unfortunately, that did not work out. We were so fortunate to have found you and your methods of attracting buyers worked very well and that too in record time. Rest assured, you have done an amazing job and we thank you for everything and your excellent service. We will be referring you to our friends in the Saint Louis area for any of their real estate need and also post "POSITIVE" 😀 blogs/comments on social media."
Rashmi and Rajesh Menon
"We recently worked with Evelyn Krazer of Sunshine Realty to sell our home and purchase another home in Lake Saint Louis. We could not be more pleased with the professional manner that Evelyn displayed in the negotiations of our purchase and the marketing techniques utilized in the sale of our home. Evelyn took several great photos of our house and produced an excellent brochure that reflected the strong points of our home. By maximizing our exposure, she was able to schedule several showings and secure a contract in a short period of time. Evelyn helped us every step of the way during both transactions and was still able to save us a considerable amount compared to a conventional realtor agreement. We can strongly recommend Evelyn and Sunshine Realty and would like to thank her for all her help and expertise".
Steve & Mary Probst
Home Owners
“Evelyn was referred to us by a neighbor on our street when we were not doing well as a “For Sale By Owner”. We were hoping to find a way to get into the MLS for more marketing exposure without using a realtor which would result in 6% plus in commissions. Our neighbor bragged about how Evelyn owned her own company and could get the job done with her very unique approach to drastically reduced commissions with top notch service. It sounded too good to be true but we decided to call Evelyn to check it out. We are thrilled that we made the step to call Evelyn. She promptly came to view our home to consult with us. She explained how her services would get us in the MLS like we wanted plus being our real estate representative all the way through at very very low and reasonable commissions. We were blown away by her style of taking flattering photos of our home for the MLS and Realtor.com and many other web search sites that buyers and realtors use. She provided yard signage, flyers and offered open houses and all services that other big name realtors offer. Evelyn offered advice on pricing our home by showing us comps in the area. We wanted to set our asking price much lower than Evelyn advised to price it attractively in the down market we were in. Evelyn assured us that we could ask more for our property and still sell it quickly. We were hesitant as we did not want to have our house on the market for a year or more like many homes were in our area, but we took her advice and set our asking price as she advised. Evelyn was available for us always when we called with questions and showed true professionalism. We were fortunate to have found a buyer in a very short time frame and are convinced that Evelyn’s services helped us to do it! AND we got MORE than we thought we could. How many realtors would ever suggest a higher asking price??? Normally realtors want you to sell dirt cheap so that they can sell it fast and move on…She was there for us all the way up to closing offering us great advice through contract negotiations and closing. We would highly recommend Evelyn to anyone with any real estate needs. They would not be disappointed by her!”
Dennis & Jackie Overton
Home Owners
"Exceeded expectations! In every facet you can imagine our experience with Evelyn has been outstanding. From selling our home in Lake St. Louis in less than 90 days in a tough market to buying our new home there was not a stone unturned and let me tell you, we turned some stones. She worked extremely hard trying to find the right solution for our family. I would recommend her to anyone".
The Rootz Family
Home Owners
“My wife and I decided to put our home in Hazelwood up for sale. We tried for over a year to sell it by owner with no success. We decided to list with an agent, but which one? Luckily we found Evelyn Krazer, who was then with another company. She quickly put our fears to rest as she walked us through the steps of selling our home; marketing, contracts, loan info, closing, etc. She explained everything professionally and in a way that we could understand. We had two contracts on our home within a 7 month period. Since we were now ready to purchase a home, she located many houses for us that fit our specific needs. After narrowing down our choices, she saved us over $15,000 through her expert negotiating skills. Our new home is beautiful and we can afford it because of Evelyn. For all your buying and selling needs we highly recommend Evelyn and Sunshine Realty. We couldn’t have done it without her!”
Joe & Kim Deluca
Home Owner